On a sadder note, mums cat Cleo passed on in November at the age of 15 or 16, we’re not exactly sure as we adopted her in 2013. The positive is that it was of old age that took her and she went naturally in her cat transport box.

This is a slightly unusual update as compared with recently not a lot has happened, I’ve just been chugging along being normal me, whatever that is. I am trying to enjoy this lull as much as I can, whilst still being the out of control control freak that I am, over how much water I have left of my daily allowance, about checking what’s been programmed into the TV and about the need to continually burp. Hence the title of this update, normal for me, what is that?

So what has happened since the beginning of November?

Unfortunately, I am still having a turnover in carers as Olivia left in November, after only a month in roll and Carol has just left in the last 2 weeks, so we are currently looking to recruit, not at the best time ever to do so, but I’m still hopeful we successfully recruit in the near future.

The only major problem I’ve had is my catheters continually blocking so we got to the stage where they were being changed every 4 or 5 days instead of every 4 to 6 weeks. Fortunately my carer Tiger realised we could pull the blockage out by air suction using a syringe as we had been taught to do for my stomach peg. So far this method has cleared it every time so I have a respite from catheters being changed which is a good thing physically for my bladder. The other way we tried to stop catheters blocking was adding overnight waters through my peg, on the 3 nights I don’t have my nutritional night feed supplement through my peg. This was to keep me more hydrated, it seemed to work at first but then not. We have however kept it going as with it I am having the minimum intake really needed to run a catheter on. Fortunately this seems to be something I can stand physically as my salt levels, although just below the normal healthy band, are stable. My new stable salt level is not normal, but ok and fine by the doctors for me.

In terms of all things Urological, I’ve just had my latest appointment and the verdict is what is blocking my catheters is bladder inner lining which is flaking off. This is happening more for me because of the Bladder Stone operation I had, but it happens in you all, all be it to a lesser extent, so you are also flaky people. The solution is regular daily wash outs, we have been given a plastic jug and 4 large clear syringes to help do these, which are to be done with cooled boiled water, if it fails we can always try the air method also. They also said that I have 2 very small Kidney Stones, 2mm, that they hope they will wash away, unfortunately I am unable to drink the 3 litres of water a day they would recommend due to the effect the extra water has in reducing my salt levels. Therefore we will need to keep an eye on if I am peeing or not. If I stop peeing that we get me medical attention quickly so complications like sepsis do not occur. Hopefully all things being straight forward there will be nothing to report until after my next review in 6 months.

Due to the need to reduce hospital visits to a minimum I also saw my Spinal Injuries consultant at the same time, there are a number of things to report from that. The first being that they topped my pump up with Baclofen which is good, unfortunately the pumps battery is due to run out either in April or sometime in the following 2 months as the battery has a 7 year life span and it was inserted in July 2013. In its last month it will initially beep hourly, at about 10 past the hour, and as the battery runs down, half hourly. When it stops beeping the pump has stopped working and is dead. Grrr I hate beeping alarms outside of me, let alone inside me!

I have decided not to risk an operation to replace the pump at this time, as it is more sensible to self isolate and transfer onto Oral Baclofen, which the local doctors should prescribe shortly. I will need to transfer her across to Oral Baclofen carefully, but at least we can ring spinal Injuries for support on this, so I avoid Baclofen withdrawal symptoms.

Unfortunately on Oral Baclofen my leg spasms will be worse.

When the risk is lower in the future I may consider having the pump replaced with a new one, whether I do is likely to be determined by the scale and pain of the leg spasms, I will need to look at the balance of risk at that time.

The consultant also looked at my arm movement, which is still better than before the Botox injections in November. He encouraged me to use the splints as this will prevent tightening of the muscles. I haven’t been using them as much due to spasm pain; he said the spasms may be more painful because the muscles are working better. I guess I’ll give them another go, alongside the physio which I have been doing. The longer I keep the muscles working well, the longer I can put off having to contemplate an operation to elongate the muscles in my arms to relieve muscle tightness and pain.

As I indicated above I can confirm I am now self isolating, as I meet the criteria of a vulnerable person. I, my carers and family will do the best to be as careful and sensible as possible, but as I’ve said elsewhere, there is only so much I can do to protect myself. I have had to cancel my luxury of going out to get my nails done on top of the medical services cancelling my other appointments as non urgent, happily this means no visit to the dentist, for extractions and fillings. I am doing what I can but in the end if I get the bug, I will try and beat it and also mutate it into a small cute harmless thing, who knows that may be possible I’ve beaten a lot of bad infections before!

The reality of the next three months is that the bug is only a problem on a par for me with both the Baclofen Pump battery running out and the, albeit small, possibility of a Kidney Stone blockage. Yes I’m still keeping life simple as possible, but maybe 5 months of Sylvie Normal, was as much as I could reasonably expect.

What is amazing is that I’ve lived over half my life since I was diagnosed with MS. That landmark was actually passed last September. With help from the NHS my stubbornness has done that! That is the past, I will look forward, take on the next obstacle or battle, with the same attitude, both those that I can see, as described above, as well as those I can’t currently anticipate.

Unfortunately self isolation for me and my mum means we won’t see each other much if at all for the next weeks, which is a real bugger, but I intend to try and skype her as well as phoning regularly. Here are a couple of photographs taken with my mum just before my self isolation began.

Marcus continues to grow and grow and the colour of his hair changes as he does, I think he might have a weird genetic mutation! And I bet it comes from me.

Marcus continues to be musical and enjoys drama, he’s hoping to get music and drama as his GCSE option choices. He makes me proud my boy, he recently won the school poetry reading competition! Marcus has said he will record some of my poems, so they can be posted on my site and heard and not just there in text. I don’t know which poems he’ll choose or how long this will take to happen, but I like the idea.

We recently got hold of a new ‘old’ trombone for him. It came from a university acquaintance of mums, who’s son, who was a year behind me in my school, he got it second hand to learn to play it when he was Marcus’s age. It has been in the loft 30 years but still seems to play well. The trombone must be 50 years old at least and it comes in one of those big box musical cases of old. Marcus is very happy with it, especially as it means he has a trombone at home and a trombone at school and doesn’t have to lug one backwards and forwards. 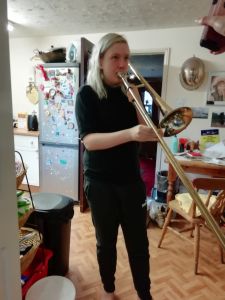 A very sleepy Cleo in her cat transport box. 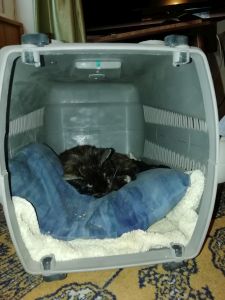 What else, My book, well as usual it is a work in progress, since last time it has had extra jokes and riddles as well as my 2 recent poems, My Bladder Stone and Mum and Me Entwined Again  and a revised introduction. I am still planning a new poem on my day to day life, after that maybe it’ll be publication time.

I think that’s it for this update

Love to you all 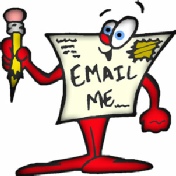 Recently I had to renew my blue badge. Usually that goes through in a straight forward manner, not this time, they sent it out fine but unfortunately it had the picture of someone else on it. 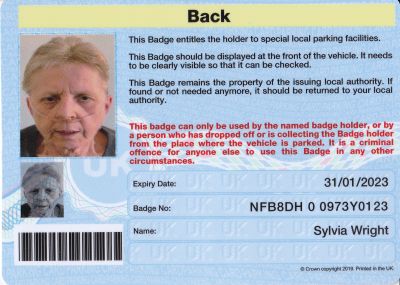 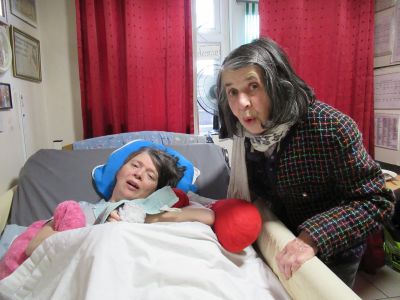 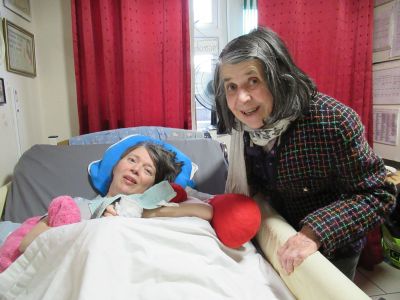